The Castle of Otranto by Horace Walpole 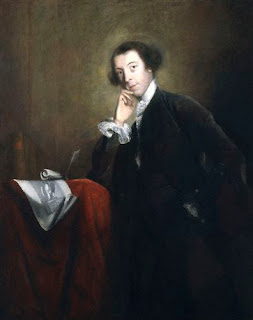 In 1765, a book was published called The Castle of Otranto. The title page proclaimed the text as translated by "William Marshal, Gent. from the Original Italian of Onuphrio Muralto, Canon of the Church of St. Nicholas at Otranto." The preface discussed various issues, such as dating the original (the style of the Italian suggested the Renaissance, the subject-matter clearly belonged to the period of the Crusades) and the author's habit of interrupting the high doings of the main characters with the commonplace absurdities of the servants.

The book was a great success, prompting a second edition in which the writer and politician Horace Walpole (left), son of Britain's first prime minister1, admitted to being the author of the work. In a new preface, he apologised to the reader for the deception, claiming that "As diffidence of his own abilities, and the novelty of the attempt, were his sole inducements to assume that disguise, he flatters himself that he shall appear excusable."

In fact, Walpole was far from being the only author of the period to foist such a deception on the public, literary follies being almost as common as architectural ones in the later 18th century. The most famous is the poet Thomas Chatterton, who committed suicide in 1770 at the age of seventeen2, having published "translations" of an imaginary 15th century poet called Thomas Rowley. There was also James Macpherson, who similarly claimed to have translated the works of an ancient Scottish bard called Ossian. It's generally accepted that Macpherson used genuine fragments of ancient Highland poetry, but most of Ossian's poem were his own works.

The Castle of Otranto was immensely popular and kicked off the tradition of gothic fiction, which Walpole implicitly defined in his second preface as a combination of the supernatural elements found in mediaeval romance with the realism of modern novelists such as Fielding and Richardson. At first, the genre consisted of lurid novels by authors such as Matthew Lewis and Ann Ratcliffe3, but it strongly influenced the Romantic poets, especially Coleridge and Keats, and found a more sophisticated voice in authors like Mary Shelley, Edgar Allan Poe and, to some extent, the Brontës.

Quite early on, the genre began splitting. Lewis's bestseller, The Monk, and many others of its kind, featured magic, ghosts and other unearthly elements, whereas authors like Ratcliffe, played down the supernatural in favour of the over-the-top love stories the genre also featured. In time, one strand came down through Poe, Stoker and many others as the horror and paranormal tradition, while Ratcliffe's fainting heroines and mysterious heroes evolved into romantic fiction4. Both traditions are alive and well today.

A little while ago, I picked up a Penguin Classics volume called Three Gothic Novels, featuring Shelley's Frankenstein, Beckford's Vathek and The Castle of Otranto. I'd read and loved the other two many years ago, but I'd never read Otranto, so I recently decided to remedy that.

It's described as the first gothic novel, but it's really no more than a novella, about a hundred pages in the standard-sized paperback. Still, it takes a while to get through. Those hundred pages consist of mammoth paragraphs (I counted one at seven pages), many of them consisting of back-and-forth dialogue without breaks. And, to make matters worse, Walpole uses absolutely no punctuation to indicate either the start or finish of speech (not even the French-style dashes), making it sometimes very difficult to work out who's supposed to be saying what. 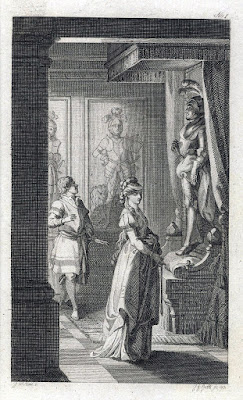 The story is a bizarre one, which Walpole claimed came to him in a dream. Manfred, Prince of Otranto, has a son and daughter, but his son is killed on his wedding day by a gigantic helmet falling from the skies. Cheated of his chance for an heir through the male line, Manfred decides to divorce his saintly wife Hippolita and marry his would-be daughter-in-law Isabella.

Appalled, Isabella flees to the nearby abbey run by Father Jerome, and is helped on her way by a young man called Theodore, who just happens to be Jerome's long-lost son. Then, as strange happenings intensify, a strange knight turns up, silent and anonymous in his armour, and the tale proceeds towards its tragic conclusion.

This is a story full of portents, hauntings and miracles, generational curses and staggering coincidences, noble heroes, swooning heroines and dastardly villains — not to mention the endlessly prattling servants. It also has not a little absurdity — the giant helmet falling on Manfred's heir wouldn't have been out of place in Monty Python and the Holy Grail. It certainly isn't especially frightening to the reader.

It's been suggested that Walpole was well aware of the absurdities in the story, and that he didn't actually take his work very seriously. Certainly, he didn't seem to have anticipated the birth of an immensely successful literary genre that spread not only throughout the English-speaking world, but all across Europe, and whose literary heirs have ranged from Charlotte Brontë to the Marquis de Sade, and in the 20th century H.P. Lovecraft to Barbara Cartland.

Ultimately, I wouldn't rate The Castle of Otranto as a great work, certainly not in the same league as Vathek, let alone Frankenstein. Perhaps, like many trail-blazers, it suffers from the fact that the novelty alone was enough in its day. From a modern perspective, the plot comes over as incredibly clichéd, and it progresses largely by coincidences and non-sequiturs. Though the shortcomings in the writing may be partly put down to the conventions of the time, the two masterpieces that share the volume read much more easily and naturally.

Nevertheless, I'm glad I've read it, and I'd suggest it would be worth anyone's while to try it. It isn't very long, and you'll be witnessing the exact point at which the modern horror tradition and the modern romantic tradition both had their birth.

1 Robert Walpole never actually held the title of prime minister, which didn't become an official government position till the end of the 19th century, but he originated the concept of one minister dominating the government, in place of the reigning monarch actively heading it. Walpole held the posts of First Lord of the Treasury, Chancellor of the Exchequer and Leader of the House of Commons, with his allies in other key roles. "Prime Minister" was a description applied sarcastically by his enemies.

2 Or not. There appears to be some evidence that, far from deliberately taking poison, he accidentally ODed on prescription medicine.

3 Jane Austin had a love-hate relationship with these authors. She read them voraciously, but also mercilessly parodied the genre in Northanger Abbey.

4 The original meaning of "romantic" was resembling the mediaeval romances, so called simply because they were written in the "romance languages" (ie those derived from Latin). The word was almost interchangeable with "gothic", but the two terms became applied to the two diverging branches of the genre and are now poles apart.


The images of Horace Walpole, painted by Joshua Reynolds in 1756, and an illustration from a 1794 German edition of The Castle of Otranto are both in the public domain.
Posted by Nyki Blatchley at 12:59 AM

Email ThisBlogThis!Share to TwitterShare to FacebookShare to Pinterest
Labels: Gothic fiction, literature, The Castle of Otranto