In 1830, the novelist Edward Bulwer Lytton published a new novel, Paul Clifford.  At that time, the most usual way to start a novel was either to give a potted biography of the protagonist, or else to treat the reader to a lecture on the moral or philosophical theme of the story.  Bulwer Lytton, however, wanted to pitch the reader straight into the mood of his tale, as writers now are encouraged to do, so he opened with the immortal words, “It was a dark and stormy night...”

It wasn’t Bulwer Lytton’s fault that, nearly two centuries later, his fine opening would have become one of the most notorious of all clichés, beloved alike of parodists and beagles.  In the context of 1830, it was actually a pretty strong way to start a novel.

The English language is full (as is any language) of phrases and sentences coined long ago by some genius that are used thoughtlessly (and often incorrectly) by millions today.  It doesn’t matter too much if these are from well-known and respected sources, such as Shakespeare or Dickens (or even the final scene of Casablanca) since enough people realise that these are quotes and not meant to be original.  When the source is more obscure, this can be different.

Just as very few people today read Bulwer Lytton, I’d be surprised if anyone reading this piece has seen the 1931 film The Last Flight.  A tale of GIs going AWOL in Europe after World War I, it includes a scene where one character is badly gored jumping into a bullring in Spain on an impulse.  Asked why he’d done it, his friend comments, “Well, I guess it seemed a good idea at the time.”

Although it’s not known for sure, this appears to have been the origin of a phrase that can only be used now with an element of self-mockery.  It’s an excellent phrase, though, and easy to see why it’s become such a cliché.

And that’s the point: clichés aren’t intrinsically bad.  Quite the reverse: whether they’re phrases or plot elements, they only become clichés because they were originally such great ideas that everyone wanted to use them, not terrible things to be avoided like the plague.

Avoid like the plague.  For centuries, the plague was the scourge of Europe.  Imagine a combination of AIDS, SARS and bird-flu, and then multiply it by at least ten.  It terrified people, and anyone who heard that phrase would have felt in their guts just what it meant to need that badly to avoid something.

The phrases and situations authors try to avoid were all great ideas at one time or another.  What could make a better story than the heir to a great throne being raised in obscurity, only to recognised at the crucial moment?  Or two people who start as enemies and find themselves falling in love against their will?  The problem is that they’re too good ideas, and countless thousands of writers before us have already taken advantage of the fact.

That doesn’t mean these ideas or phrases can’t still be used, just that authors should avoid reaching for them automatically, rather than thinking of new ideas for themselves.  If a clichéd situation is what must result from the characters and situations you’ve created, then by all means use it – but use it, rather than just repeat it.  There’s always going to be a new twist, and unexpected approach, that can make the tiredest cliché fresh and exciting.

Like writing tragedies in blank verse, all clichés worked triumphantly in their day, but should only be used now if it’s the right, inevitable way to do it.  You might say that they all seemed like good ideas at the time.

Posted by Nyki Blatchley at 5:10 PM No comments:

Nemesis on the Wily Writers podcast

Sam Nemesis, private investigator to gods, heroes and monsters, has a tricky case to solve – Medusa the gorgon has been murdered, and her distraught sisters want Sam to find the culprit. But how’s he to track down a wannabe hero punk who seems to have friends in the very highest places?

Listen to Nemesis, read by Philip Pickard, as part of the Wily Writers podcast's Mythpunk edition
Posted by Nyki Blatchley at 4:08 PM No comments: 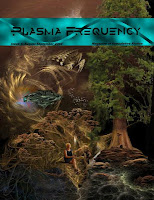 Plasma Frequency, the brand new magazine of speculative fiction, has published its first issue, including my story Aslahkar.  An explorer who's travelled far to reach the legendary city of Aslahkar finds nothing but windswept ruins - but is that really all there is here?


Buy a print copy or download free here
Posted by Nyki Blatchley at 5:48 PM No comments:

The Cell in Bards and Sages Quarterly

The July issue of Bards and Sages Quarterly is available, including my flash piece The Cell.  Karpelthrep the Mighty, the greatest sorcerer in the Thirty-Nine realms of Dundael, has played for high stakes and lost.  Disgraced and imprisoned, he faces his greatest challenge: his cellmate.