Email ThisBlogThis!Share to TwitterShare to FacebookShare to Pinterest
Labels: Shakespeare

My story A Deed Without a Name is published today in Penumbra’s Shakespeare-themed issue.  I’m not going to reveal which play the story refers to (although the title might give it away) but I thought I’d talk about some of the experiences I’ve had with Shakespeare over the years.
I can’t claim to know Shakespeare’s works inside out.  There are thirty-eight plays acknowledged as being wholly or partly by Shakespeare (thirty-seven in most editions of the Complete Works, plus Two Noble Kinsmen) together with the sonnets and the narrative poems, but of those I’ve never seen or read ten.  Note to self: must do better.
A trace of intellectual snobbery makes me give myself bonus points for those I’ve seen on stage, but actually there’s nothing wrong with watching film or TV versions.  I’ve always believed that Shakespeare would be delighted with both media and would be eager to write for them.
Still, there’s something unique about being present for a great stage production of Shakespeare.  The earliest plays I recall seeing were at the Regents Park Open Air Theatre in London.  My parents, who had both been actors, took us to see both Twelfth Night and A Midsummer Night’s Dream there when I was quite young, although I only have very general memories of these visits.
A more awesome experience, when I was perhaps about ten or eleven, was being taken to see a production of Much Ado About Nothing, with Maggie Smith and Robert Stevens.  Without any disrespect to the Regents Park casts, this was an entirely different level, and certainly as good, in a different medium, as Branagh’s excellent film version.
Of course, we “did” Shakespeare at school.  Generations of kids have hated Shakespeare for the dull way he’s taught but, although our classes were in the traditional manner, I already knew how wonderful the plays could be and enjoyed reading them.  We studied Hamlet for A-level, and I went to two memorable productions within a year, both at the Cambridge Theatre in London.
The two Hamlets I saw were Alan Bates and Ian McKellan (the latter fresh from his breakthrough roles at Shakespeare’s Richard II and Marlowe’s Edward II, both of which I’d seen on TV).  Of the two, I preferred the Bates production, which was lively and fun, bringing out the surprising amount of genuine comedy in the play.  The McKellan version, by contrast, was a serious, doom-filled tragedy, but both were excellent in their own ways.
The production I treasure most, perhaps, is the RSC’s version of Twelfth Night with Judi Dench as Viola and Donald Sinden as Malvolio.  It shouldn’t be a surprise to anyone that Judi Dench was brilliant, but anyone who only ever saw Sinden’s highly mannered and over-the-top performances in TV sitcoms might not realise what a wonderful stage actor he was.  His final exit, promising “I’ll be reveng’d on the whole pack of you” is possibly the most memorable moment I’ve ever seen on stage.
I’m the non-theatrical member of my family, but I still managed a couple of small parts in productions at university.  In Macbeth, I played a minor lord called Menteith, who mainly stood around and had occasional lines.  In Julius Caesar, however, I played Cinna the Poet, who can be best described as a cameo role.  He’s the innocent bystander who gets torn to pieces by the angry mob because he happens to have the same name as one of the assassins.  I screamed a lot in that part.
I’ve been to a number of fine productions since the ones mentioned – though I’ve also missed plenty I’d love to have seen, especially in recent years – as well as many on TV and film.  I remember a spine-tingling TV version of Macbeth with Eric Porter (Banquo’s appearance at the feast was as gut-wrenching as anything I’ve ever seen in a horror film), and Laurence Olivier putting in classic performances in both King Lear and The Merchant of Venice.
Then there are the films.  There have been some great film versions of Shakespeare, as well as some that are less great, including a terrible Hollywood version of A Midsummer Night’s Dream in the 30s.  The ones that stand out for me are Olivier’s Henry V and Richard III, the Burton/Taylor version of The Taming of the Shrew, and Branagh’s Much Ado About Nothing, Henry V and Hamlet (the only film version of the play I’ve enjoyed unreservedly) but worth a gold star for bravery are Anthony Hopkins’ film of Shakespeare’s gore-fest Titus Andronicus and Derek Jarman’s bizarre reading of The Tempest.
I hope there’ll be plenty more – perhaps versions by actors just starting out that will put the productions I’ve seen into the shade.  In any case, it’s impossible to see too many Hamlets, Twelfth Nights or Romeo and Juliets.  And there are always those ten plays I still don’t know.
Posted by Nyki Blatchley at 3:02 PM 1 comment:

A Deed Without a Name Now Available in Penumbra 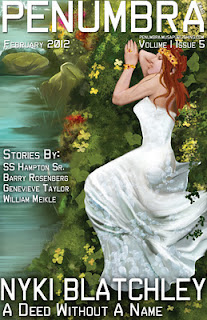 The February issue of Penumbra is now available, with my short story A Deed Without a Name as its featured story.

This issue is dedicated to the theme of Shakespeare, and also features fiction by Stan Hampton Senior, William Meikler, Genevieve Taylor and Barry Rosenburg, along with non-fiction by Richard G. White, Lori Basiewicz and Celina Summers, and an interview with artist Rebecca Treadway, who designed the stunning cover of this issue.

Penumbra can be bought here for a mere $3.99 - or why not invest in a subscription for 12 issues of this fast-rising publication for $36?
Posted by Nyki Blatchley at 2:47 PM No comments: