Let's Just Make Up Our Own Story 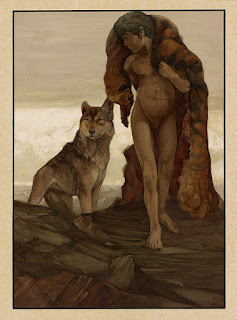 I was, I think, eleven when the Disney cartoon of The Jungle Book came out. Kipling's original book was among my favourite reading at the time, and when I saw what Disney had done to it, I was outraged in the way only a child can be — starting with the mispronunciation of Mowgli ("first syllable to rhyme with cow," Kipling had specified) and carrying on into the total reinvention of the characters and tone.


At a maturer age, of course, I can accept it's probably an extremely good film, if you don't compare it with the original story, but in a way that makes it worse. Generations of kids have now grown up believing that is The Jungle Book, and I can imagine them dismissing Kipling's version as "not the proper story."


Disney have done the same to others of my childhood treasures (notably Winnie the Pooh), but of course they're far from the only ones. I've seen film "versions" of books that have almost nothing in common with their sources except for a few names. It makes me wonder why film and TV companies bother to pay for the rights when all they're going to do is write their own stories.


The particular case that prompted this blog was the BBC's recent two-part adaptation of Stonemouth, one of the last novels by Iain Banks, one of my favourite authors. Now, this can't have been an easy book to adapt: a very immersive first-person narrative that wanders between present events and memories of the past as the thoughts ramble through the mind of the narrator, Stewart.


In fact, they handled that aspect quite well, although the flashbacks were sometimes too heavily cut to make sense. The problem was that the plot and characters were radically changed. The first part wasn't too bad, although the funeral that prompted Stewart to return home for was for a different person, and the friend who funeral he was now attending was made a far more pleasant person than in the book.


It was in the second part that really blew it. The book involves a typically Banksian uncovering of various mysteries, ending in an explosive scene that's all the more effective for being unlike the rest of the book. Instead, among numerous other changes, the adaptor inserted an entirely superfluous action scene, along with the bewildering revelation that a relatively minor character had actually been behind everything, in place of the more complex and believable outcome in the book.


Now, I understand that it isn't always possible to adapt a novel literally for the screen. They're different media, and sometimes it's necessary to find different solutions for the narrative. But there's a world between changes to account for the medium and arbitrary differences because someone thinks they know better than the author.


Peter Jackson's very variable Tolkien films offer both kinds of example. In The Two Towers, the scene where Faramir finds out about the Ring is done completely differently in the novel and the film. The problem here is that the scene Tolkien wrote consisted of three characters sitting around talking for a long time. That can work in a book, of course, and Tolkien did a great job of building up the tension, but a film needs visual tension as well as dialogue. I'm not sure that Jackson's solution would have been what I'd have chosen, but it made sense.


Contrast with that his totally irrelevant introduction of Tauriel in the films of The Hobbit and her absurd romantic subplot with Kili. I can certainly see that the lack of female characters might have needed to be addressed, but honestly, couldn't they do better than "Female character? Love interest, obviously"?


Perhaps the most traumatic experience I've had since The Jungle Book was Troy. Again, this may well be a good film taken in isolation, but the problem is it's not in isolation. This is supposedly a retelling of one of the world's greatest stories, and IT'S WRONG FROM BEGINNING TO END. This might not worry some people, but it should be a concern that, as with The Jungle Book, large numbers of people are being completely misled about the 3000-year-old story of the Trojan War.


Why do adaptors insist on doing this? In the case of Troy, it would have made more sense to change a bit more, give the characters and places different names, and put it out as an original story. It's even more mystifying when they have to pay for the rights, as with the American TV "remake" of The Prisoner a few years back, which had only a handful of cosmetic similarities to the original series. Why not save money and call it something else, since it's a completely different story?


This isn't a new problem. It's been going on for as long as there've been films, and there's no prospect of it ending any time soon. And, as I said, stories do have to be tweaked to fit a different medium — but tweaking isn't the same as wholesale butchery.


Instead of obsessing with buying up the rights to an original, why not just pay the scriptwriters to make up their own story? That's what they do, after all.
The illustration of Mowgli from The Jungle Book by Rudyard Kipling is by Cesar Ojeda, and reproduced under Creative Commons.