A Local Habitation and a Name

My World and Welcome to It 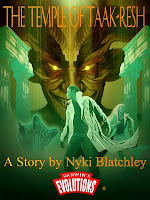 The Temple of Taak-Resh
by Nyki Blatchley
Cover by Jesus Garcia Lopez
Published by Darwin's Evolutions
$0.99
Buy a copy here

Karaghr and Failiu are a couple of homeless adolescents - or, as they prefer to think of themselves, outcast wandering sorcerers, together against the world. Arriving in the city of Hannor with no money, no prospects and only a smattering of the local language, they target the Temple of Taak-Resh, said to take in talented sorcerers.
The problem is that Kari and Fai have chosen the worst possible day to present themselves at the temple. Before they know what's happening, the two teenagers find themselves caught up in the affairs of Hannor, with nothing but their imperfect magical skills between them and disaster.

Excerpt﻿
"Don't worry." The eagerness was back on Karaghr's face. "It'll be easy to sell our sorcery. Remember, they say everyone in Hannor employs sorcerers."
"Well...yes." Failiu had heard this, but how useful would it be? "That means there'll be plenty of them already. Maybe...I don't know...maybe they have some kind of guild, and they won't let outsiders in."
Failiu only had experience of one temple, which didn’t help much. Hannor felt like the far end of the world, so who knew what it might be like here?
"Ah." Karaghr's expression turned a shade smug. "I got talking to one of the sailors, and he said something called the Temple of Taak-Resh takes in promising sorcerers. You just go
and present yourself."
"Just like that? Was it the same sailor who offered to teach you to talk to dolphins?"
"No, not that one. It'll be all right, Fai. All we have to do is go to this temple and show them what we can do, and we'll have a hot meal and a bed by nightfall."
Knowing it seemed too easy, Failiu tried to suppress the surge of hope and be sensible. "That's assuming we're good enough. We didn't finish all the books before the priests found out."
"Of course we're good enough. We can do protection spells, finding spells, things like that. Probably even raise a demon or two. What can go wrong?"
"That's what you said at Mathelis."
"Well, that was different. Anyway, that wasn't long after we left Errish. We've practiced a lot since then."
Failiu nodded slowly. She still wasn't convinced they were good enough, even if they hadn't had any disasters lately, but it was certainly worth a try. This temple could only turn them away.
Posted by Nyki Blatchley at 11:09 AM 1 comment: