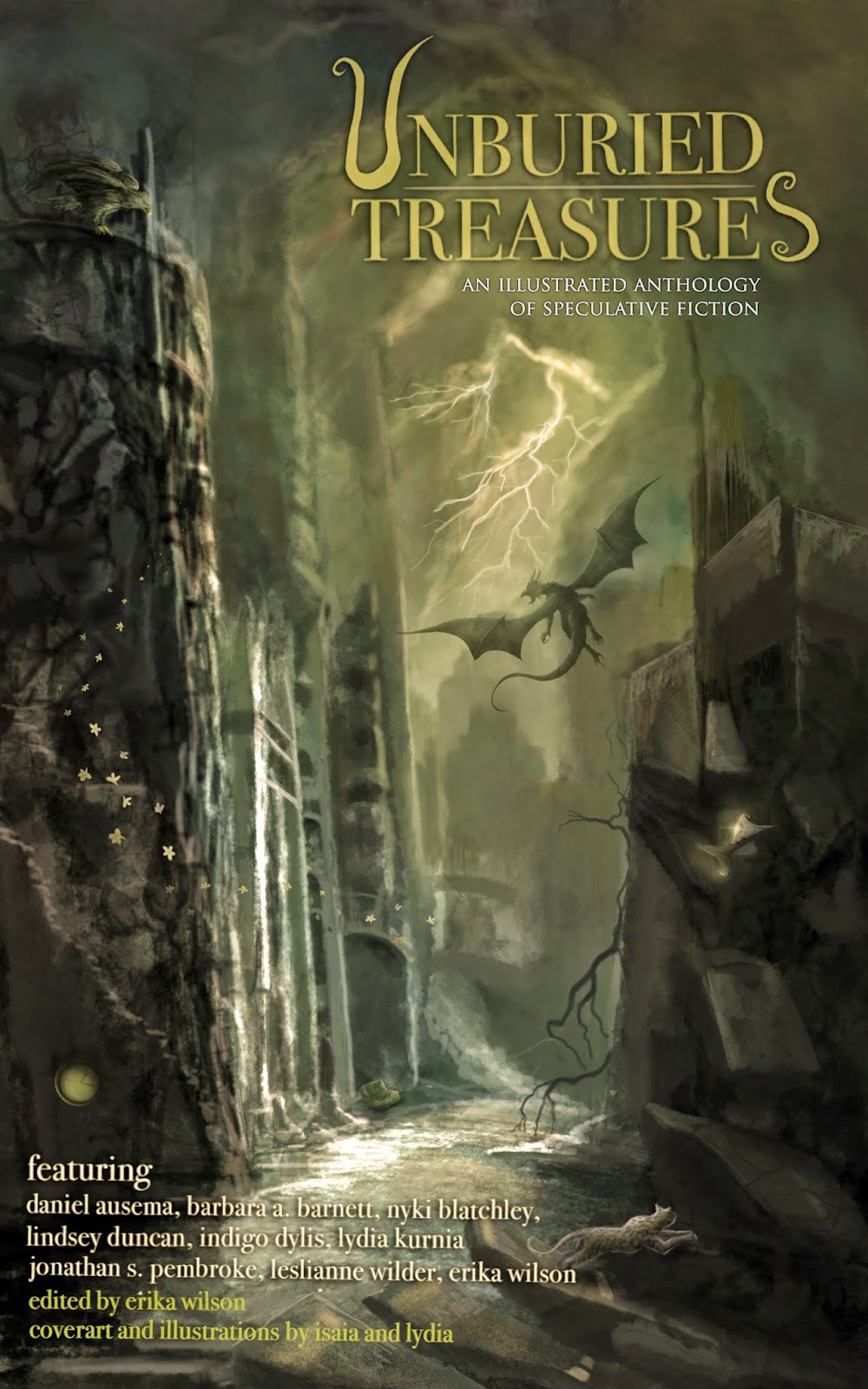 Unburied Treasures
edited by Erika Wilson
Illustrations by Isaia and Lydia
Available on Kindle from Amazon.com & Amazon.co.uk
Also available from Smashwords, Barnes & Noble, & Amazon (UK, US, Australia)
This beautifully illustrated anthology features stories loosely on the theme of "unburied treasure" from a variety of speculative authors, some widely published, others who should be. There are stories from Daniel Ausema, Barbara A. Barnett, Nyki Blatchley, Lindsey Duncan, Indigo Dylis, Lydia Kurnia, Jonathan S. Pembroke, Leslianne Wilder & Erika Wilson.
My story, Finder's Fee, is set in a version of the modern world that's been conquered by intelligent dragons. Humans are merely the servants of the dragons and their genetically engineered lizard people, and the world is run according to what dragons value. And, as everyone knows, what dragons value is treasure. They employ human Finders to sniff out unclaimed treasure, but one has his own ideas of how to exploit this situation.
Excerpt from Finder's Fee
"Do you have an appointment?" asked the lizard at reception.
"Well... not exactly."  This was all I needed, after weeks away and the long drive yesterday.
The lizard fixed me with those unnervingly lidless eyes.  I tried to stare it out, but that was never going to happen.  "Not exactly?" it queried at last.
"Well, actually, no.  No, I don't have an appointment, but Master Ssa'ath will want to see me."
I could have told the lizard I was one of Ssa'ath's Finders and it wouldn't have dared delay me, but probably best not to.  The Masters all get twitchy about anyone knowing who their Finders are: afraid someone else will try to poach them.  It was easier in the long run to put up with the lizard's haughtiness.  If everything went to plan, it would be the last time.
The lizard's impassive face expressed silent scorn at the idea that a Master would want to see a mere human, but it touched the computer screen a few times with its tongue and then nodded.  "Master Ssa'ath has a window in half an hour.  Ten minutes.  And if your... assumption is incorrect, it'll be your head in his mouth.  Please wait here."
"Thanks," I said from habit, but it had gone back to its work and didn't look at me again.  I settled myself on a chair clearly designed for lizards.
I'd visited Ssa'ath's offices a number of times, and the usual lizard knew me, though was no more welcoming than this one.  They always made me uneasy, right back when I was a kid.  There weren't many of them around then, but the Masters had begun genetically enhancing them, breeding faithful servants to replace the humans they despised.  Most of us never forgave the lizards for that.
I hoped I was right in my assumption that Ssa'ath would welcome me.  The lizard's colourful expression was merely a saying, but you never knew with the Masters.  He should be pleased to hear my news, as long as he didn't guess my true motives.
﻿
Posted by Nyki Blatchley at 11:00 PM